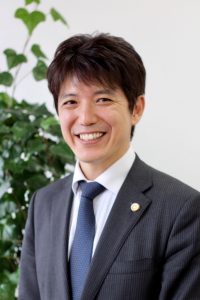 Attorney Nagatomo had worked for the Ministry of Agriculture, Forestry and Fisheries from 1996 to 2006 as a First level civil officer. While working for the Fisheries Agency in the Ministry, he was mainly in charge of international affairs and attended various international conferences as a member of national representatives such as the International Whaling Commission (IWC), the Russia-Japanese Fisheries Agreement Negotiations, the African Development Council (TICAD), the Atlantic Coast Africa Fisheries Ministerial Conference (COMHAFAT), the North Atlantic Maritime Mammal Committee (NAMMCO). He also worked in the Department of International Affairs of the Ministry as a representative negotiator to conclude the economic partnership agreement with India from 2005 to 2006.

He has deal with not only international issues, but also domestic issues such as divorce, inheritance, business contract, corporate laws. He is also giving services of intellectual properties such as registration of trade mark and patent.

Fishing: loves fishing since elementary school student. He is called as a fish professional lawyer.
Kyudo (Japanese archery): He has 5th dan level archer. He won the high school competition in Kumamoto Prefecture and participated in the Inter-high school national competition as the winner of Kumamoto competition. He also won the U.S. National Kyudo Championships in 2000.
Snowboarding: enjoying powder-snow in Hokkaido currently.

人間万事塞翁が馬(jin kan ban ji sai ou ga uma): the proverb from an old Chinese story which means “inscrutable are the ways of heaven”

Thank you for visiting the website of Nagatomo International Law Office. I am Takanori Nagatomo, the representative attorney of T&N Nagatomo Law Professional Corporation.

Our firm was established in 2014 as the first international law firm in Hokkaido to focus on international matters, and we have supported many international business owners in Hokkaido. Currently, we have three attorneys in different fields of practice; two litigation attorneys and one patent attorney.

As the world becomes more internationalized especially in the business area, the world is strongly and intricately connected not only in the trade of goods but also the exchange between people.

In fact, the number of inbound people in Japan has increased dramatically in the last ten years, and Japan’s international relations, which used to depend on trade and import/export, are shifting the emphasis to tourism and human interaction. In Hokkaido, many foreigners not only come to Niseko and Furano as tourists, but they have actually started their own businesses and are taking root in their local communities. Nowadays, international investors and tourists are indispensable to the economy of Hokkaido.

Prior to becoming a lawyer, I worked for private companies in Japan and then worked for ten years at the Ministry of Agriculture, Forestry and Fisheries. While working at MAFF, I worked at many international conferences.  I also had opportunities to work for the World Bank and World Resource Institute as an intern.

Furthermore, as I have been involved in many business and governmental affairs in Russia and China, I have strong networks not only with English-speaking countries, but also with such former communist countries. Therefore, our firm is able to transcend national boundaries.

Through these experiences, I have the desire to help foreign people to make their businesses successful by overcoming their problems in Japan especially in Hokkaido. That is why I decided to establish an “international law firm” here in Sapporo.

It is my great pleasure to help international people in Japan so that they live here comfortably and do business successfully, through supporting Japan’s internationalization.